Genrich Altshuller, a Russian inventor, studied over 40,000 patents for the key principles involved in innovation. In his original book, And Suddenly an Inventor Appeared, Altshuller identified 27 principles and named them TRIZ--the Theory for Inventive Problem Solving. Later analysis expanded the 27 principles to 40. The QI Macros TRIZ Template contains many tools to use these principles.

The Evolution of Technical Systems

Altshuller says that technical systems evolve in a predictable pattern:

One of the initial steps in innovation is to figure out what phase of development your system is in. This gives insight into what to do next.

Begin with the Ideal Final Result in Mind

Stephen Covey says: "Begin with the End in Mind." Altshuller calls this the Ideal Final Result (IFR). Regardless, one of the first steps to innovation is to fully imagine the end result. In NLP we call this a well-formed outcome.

If you want to create a new Google, airplane, job, relationship or whatever, the first step is to determine the (IFR). The IFR, if it's different enough, will raise some conflicts that need to be resolved.

The problem solving process is simple: 1) convert your specific problem into a general one; 2) apply TRIZ principles to the general problem; 3) convert the general solution to a specific one.

The gap between the current situation and the IFR causes the mind to start searching for ways to resolve the conflict. It doesn't matter if it's Boeing trying to design a bigger, more efficient airplane or a smoker that decides to stop smoking, there's always a conflict to resolve.

Boeing did it by switching from aluminum and titanium to composite materials that are lighter and stronger. A smoker might decide on many paths: patches, gums, weaning, cold turkey or hypnosis. The TRIZ contradiction matrix helps identify solutions to the contradiction. If, for example, we want to increase the length of a moving object (3) it might also increase the weight of the moving object (1). TRIZ principles we can apply to this problem are 15, 8, 29, and 34).

QI Macros Contains a Contradiction Matrix with 39 Categories. Here is an example of the first five. 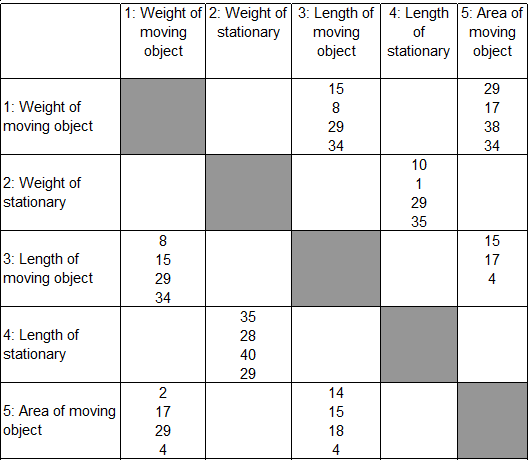 A list of forty Inventive Principles are also part of the QI Macros template. 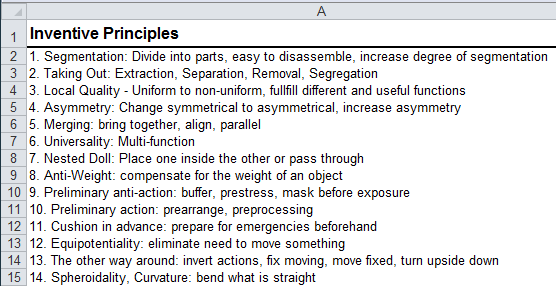