When to Use the Mann-Whitney Test

A Mann-Whitney test (equivalent to Wilcoxon Rank Sum Test) compares the differences between two independent samples to determine if they differ in location.

Use Mann-Whitney or Wilcoxon Rank Sum tests instead of Mood's Median Test, as they provide more accurate results.

Note: Excel does not do statistical tests of non-normal (i.e., not "bell shaped") data. QI Macros, adds this functionality with a set of of non-parametric test templates.

To conduct a test using QI Macros he will: 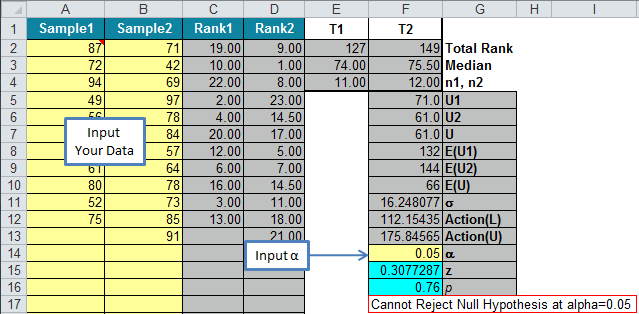 Tip: As you enter additional rows of data in columns A and B, the formulas in columns C and D should be automatically extended. If they do not extend, you can extend them yourself using copy and paste.