Trying to Do a Levene's Test in Excel?

Levene's Test compares two or more independent sets of test data. It helps determine if the variances are the same or different from each other. The Levene's Test is like the f test. However, the Levene's test is robust enough for non-normal data and handles more than two columns of data. QI Macros uses Median (Brown-Forsythe modification) instead of the Mean for calculations.

Note: Excel does not do a Levene's Test; QI Macros adds this functionality.

If you're producing rubber made with two different recipes, you might want to know if the variances in tensile strengths are the same or different (Juran's QC Handbook 4th pg 23.74):

Conduct a test and enter the data into Excel. 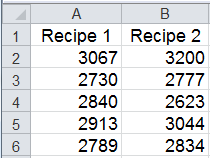 Click and drag over the data to select it and click on QI Macros Menu, Statistical Tools, f and t Tests and then Levene's test for variance:

QI Macros will perform the calculations and interpret the results for you.

While an F test works well on two-samples of normal data, it isn't robust enough to handle non-normal data or more than two samples. (Notice that Levene's p value differs from F Test's two-tailed value of 0.305; however both cause acceptance of null hypothesis.)