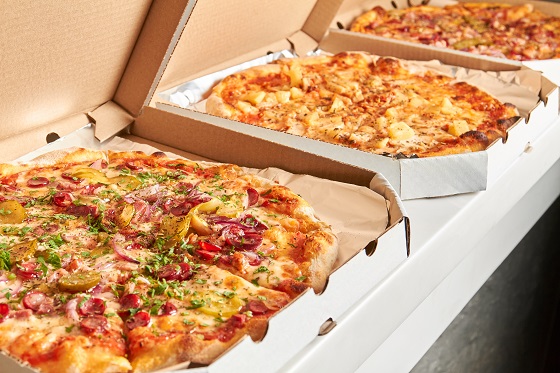 In every town there are locations that emerge as gathering places for people who share similar interests. The musicians in an area might tend to congregate at certain establishments; fans of a particular sports team at other spots, etc. In my area, there’s a place where statisticians and Quality Improvement people go: Pareto’s Big Bar.

As a Freelance Quality Improvement Specialist, I tend to be grouped in with the Q.I. people, but I count quite a few statisticians from that place as friends. My interactions at Pareto’s Big Bar have been less of the “in person” type and more of the “takeout or delivery food” type in recent months, so I miss the comradery and the friendly (if sometimes loud) discussions with other patrons about disputed topics such as Standard Deviation vs. Sigma Estimator. I look forward to the day very soon when we can once again have these debates face-to-face.

This is top of mind for me because I happened to be driving down the street this morning when my cell phone rang. Before I could even say hello, the voice on the line said, “Hey, Q.I. Guy! Nice Colorado Rockies cap you’re wearing. Too bad it isn’t a Yankees hat like mine.”

I instantly recognized the voice as belonging to Old Phil, a regular at Pareto’s Big Bar. “Old Phil! How have you been? Did I just drive past you or something?”

“Look in your rear view mirror,” was his reply.

I did so and saw Old Phil driving his old tan Cadillac directly behind me, wearing his ever-present New York Yankees hat. He waved, and continued. “I’m glad I saw you. I may be able to point you to a client. You wouldn’t happen to be free for a few minutes now, would you?” he asked.

“I’m out running some errands, but nothing that can’t wait. What’s up?”

“Pull over and let me pass you, then follow me. It’s close by.”

In just a few turns and after just a few minutes, I found myself in the parking lot of a small pizza place. As I got out of my car with my laptop and and put on my mask, I saw a row of delivery vehicles bearing the name “DiBravura’s New York Pizza” lined up at the parking spaces nearest the building. Old Phil emerged from his car wearing a mask as well and said, “Come on; follow me.”

We entered a side door into a busy kitchen. Many workers were rolling out crust, applying ladles of sauce and handfuls of toppings to the crust, and moving the pizzas into and out of the ovens with large wooden paddles. Once through the kitchen, we walked down a narrow hallway until we reached a closed door. Phil knocked and said, “Lars! It’s Phil!”

Through the door a muffled voice called out “Ya!”

The door opened and Old Phil led the way into a sparse but comfortable office. Standing behind the desk was a tall, thin blond man. “Lars,” said Old Phil, “This is the fella I’ve been telling you about.” He turned to me. “I’d like you to meet Lars Pederson, the owner.”

“Ah!” the tall man exclaimed in a Scandinavian accent. “How fortunate! Phil has been talking on you to me for quite some time!”

Phil patted me on the back. “If you two will excuse me, I’ll leave you to it. Hope to see you again soon when Pareto’s opens back up. I’ve got to get home. Today’s opening day, and my Yankees are playing the Blue Jays. Can’t miss the first pitch!”

Old Phil closed the door behind him and Lars gestured toward a small seating area near the window. “Please, have a seat.”

Lars nodded, and I could tell from the tone of his voice that he was smiling behind his mask. “Yes, I am the owner of DiBravura’s New York Pizza. I tell people I am from far northwestern Italy; can you not tell from my accent? You start in Italy, then go far north and far west long enough and you’ll find Norway.” He laughed. “The truth is, my best friend from university allowed me to use his name for the sign. I do not think many would order from me if it said ‘Lars Pederson’s Pizza of Stavanger, Norway.’ Yes? No?”

That made me chuckle as well. “I suppose not.”

“We open 15 months ago with delivery only until we remodel the dining room. When lockdown hit, our delivery took off. We didn’t need to finish the dining room! Uff da! As my mother used to say: It’s never so bad that it’s not good for something!” Seeing the blank expression on my face, he added, “It means something like, ‘When one door closes, another opens.”

I nodded understanding. “So Lars, how can I help?”

“We’ve got good processes here. I think we can make them better. I live next door to Phil, and asked him if he knew someone who specializes in such things. He think of you.” He opened his laptop and copied some files to a USB drive, which he handed to me. As I opened my laptop, he began to demonstrate on his. 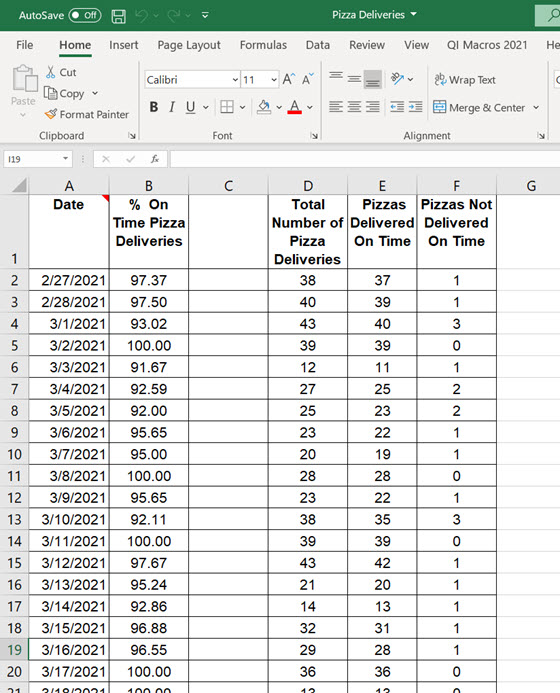 “This is a sample of some of the data I collect. This shows the percentage of on time deliveries we make in a day. Phil tells me how you recommend QI Macros program, so I buy it, but this makes no sense to me. I highlight the dates and percentages, then choose the XmR because I hear a man named Dr. Wheel give a talk and say it is the chart he use…” began Lars.

“…that would probably be Dr. Donald Wheeler, I believe,” I interjected. “He calls the XmR chart the ‘Swiss Army Knife’ of Control Charts.” 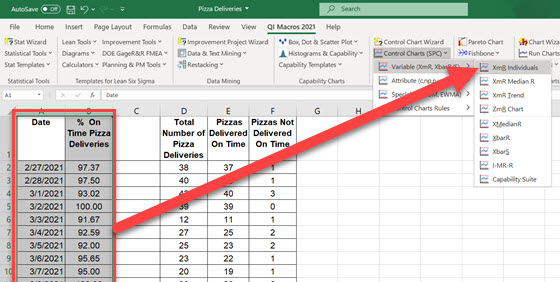 “Wheeler, yes! So I choose XmR chart, and look where it puts the Upper Limit!” Lars turned his laptop so we could see it. “This shows the Upper Limit at 105%. How can this be? 105% is impossible!” 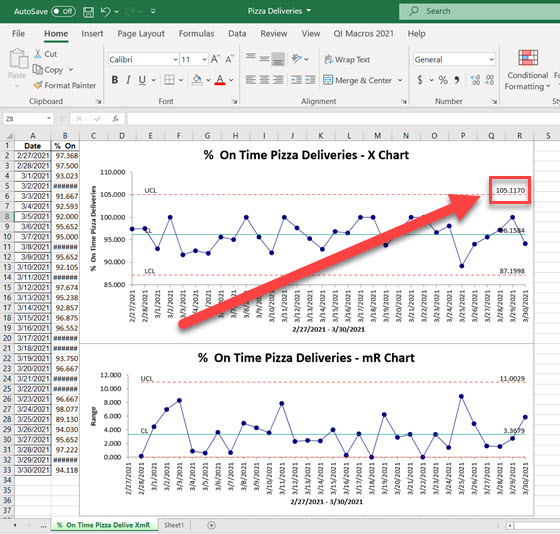 Now it was my turn to chuckle. “Yes, that does appear strange, doesn’t it? However… even though it doesn’t look correct, and even though it’s absolutely not possible in the real world… would you believe that it’s not wrong?”

The tall Norwegian tilted his head slightly and looked confused behind his mask. I continued the explanation.

“Statistics is looking at a series of numbers and setting the UCL and LCL at the levels where – based solely on the behavior patterns of those numbers – over 99% of the data from that process SHOULD fall.”

“Yes, but there cannot be anything over 100,” offered Lars.

Once again, Lars tilted his head slightly. I continued.

“All statistics knows is that your data is a series of numbers varying between about 89 and 100. Let’s pretend that, instead of calculating on-time delivery percentages, you were in a factory weighing wooden blocks in grams. The pieces you weigh have exactly the same values as your data – between 89 and 100. In this example, your chart would look exactly as this one does now, right? Would it be possible in that instance to get a denser piece of wood that weighs more than 100 grams?”

“In this case, statistics is relying on you – the user in the real world – to decipher the difference between what it’s telling you and what happens in the real world. In fact, it’s something you already do here dozens of times a day. Tell me: If I call and order a pizza with pepperoni and sausage, what will be on the pizza you bring me?”

“You won’t put any sauce or cheese on it?” I asked.

Lars nodded slowly. “Ah! I see. Even though you don’t say sauce or cheese, I know that you want sauce and cheese on pizza. So even though this says the UCL is 105, I should know that if these are percentages, I can ignore the UCL that’s more than 100.”

“That’s right. Either that, or use another chart that DOES know you can’t go over 100. Let me show you this.”

I highlighted the date column and the columns of Total Number of Pizza Deliveries and Pizzas Delivered On Time, and selected a p chart. 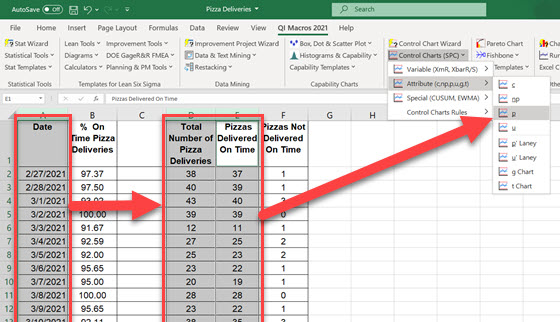 “A fella I know named Jay Arthur always tells people to ‘go on a raw data diet.’ What he means is the more you can use non-summarized data in your analysis, the better off you’ll be. Percentage of on time delivery is taking the number of on time deliveries and dividing it by the number of total deliveries, right? But you actually have the raw data here. A p chart can be used when you have access to both the numerator and the denominator. An XmR chart is indeed versatile, and if you didn’t have access to the raw data, it would be fine. However, in some cases, another chart can tell you a little more about your situation. Here you go,” I said, as the software created the chart. 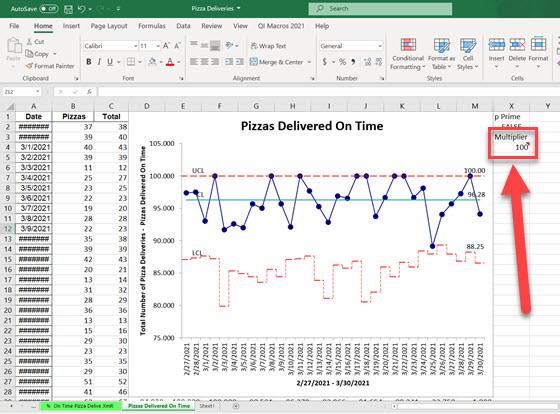 I entered 100 into the Multiplier field in QI Macros p chart so the data would display in the same scale as his previous chart (89 to 100, as opposed to 0.89 to 1.00) and turned the screen so Lars and Phil could see.

“Why is the LCL not a straight line?” asked Lars.

Lars nodded. “Ah! I see! Very good! You are not one for walking around the porridge – you make your point very well.”

“Thank you… I think,” I replied, chuckling. “Finally, I’ll give you one more way to look at this. In Quality Improvement we think more about reducing errors to zero rather than increasing efficiency to 100, so it’s sometimes helpful to turn these around and look at the cases where it’s NOT being done correctly.”

I highlighted the date column and the columns of Total Number of Pizza Deliveries and Pizzas Not Delivered On Time, and once again selected a p chart. 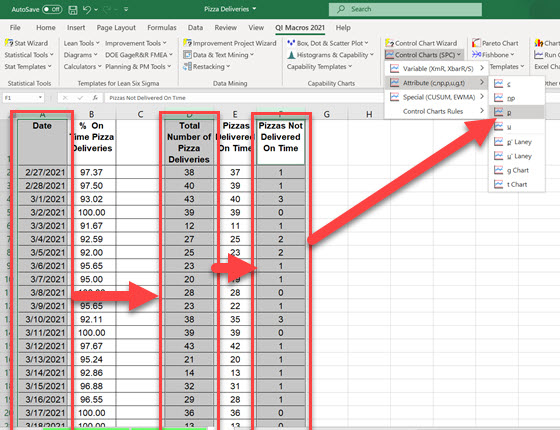 “Here I’ve once again adjusted the multiplier to 100, and you can see that you have an average of about 3.72 orders out of every 100 that aren’t delivered on time.” 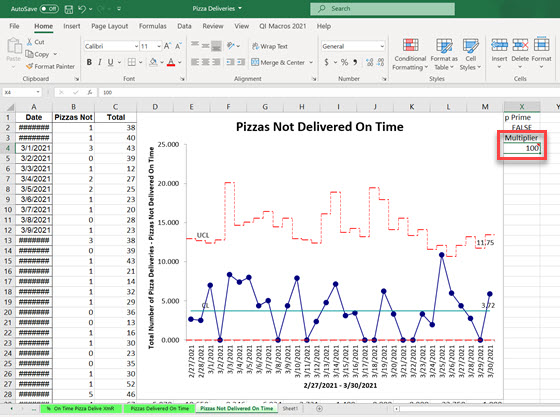 Lars stood up. “This is wonderful. Please give me your card and I can send my data. You can tell me where we need to start and what to improve?”

“I can,” I replied, closing my laptop and standing up. “It was a pleasure meeting you, Lars.”

“The pleasure was all mine,” he replied. “Let me make you a treat before you go: A pizza topped with lutefisk.”

“Oh, it’s a Norwegian delicacy!” replied Lars. “It’s codfish that’s been dried and pickled in lye until it has the consistency of jelly. In the pizza oven, it heats up and spreads like a goo over the whole pizza!”

“Uh… you know…” I said hesitantly. His description didn’t sound appealing, but I didn’t want to offend a new client. “I, uh… I should really be…”

I was interrupted by the sound of Lars laughing loudly behind his mask. “Please forgive me. Did you forget the date today? It’s April Fools’ Day. I’m sorry; I was having a bit of fun at your expense.”

“Trust me, it’s not. My grandmother made me eat lutefisk when I was a boy every time we visit. As an adult, I won’t touch the stuff.” Lars pointed at my Colorado Rockies hat. “Will you be watching opening day at home this afternoon?”

“I will! I was just running some errands before heading home.”

“Then let me make it up to you. I have your address on the card. I’ll deliver a large pizza before the first pitch, on me. How does that sound?”

“Sounds great!” I replied, opening the door. “As long as there’s no pickled, jellied codfish on it.”

Finally, if you want to check to see if your local team is playing in Major League Baseball’s opening day today, you can do so HERE.