Milling in the name of...

Home » Blog » Milling in the name of…

Milling in the name of… 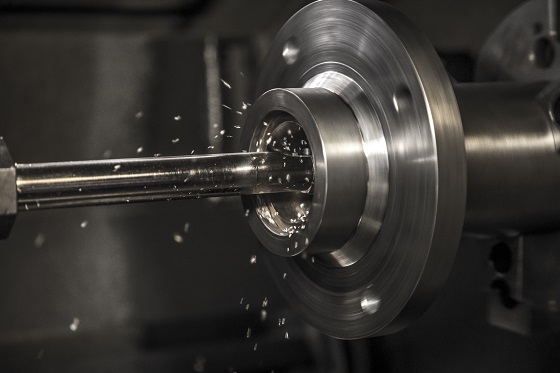 It’s been an unusual time to be a Freelance Quality Improvement Specialist. In 2019, my business was almost all within 20 miles of my home. As a result of the pandemic I began offering consultations online via video meetings and computer screen sharing. Because of that, I was able to serve clients worldwide in 2020. Now many of those clients refer me to friends and colleagues in their geographic areas, and I’m able to continue to do so for these new clients as well.

Such was the case last week when I received an email from Tom. He began by telling me that he was referred by Mike and Rudy, the co-owners of Schenker Metal. (I’d worked with Schenker Metal a few years ago, and one of the only things the two argumentative brothers could agree on was their positive opinion of my consultation.) In any case, Tom was a machinist with his own shop, and needed some assistance.

We set an appointment, and when the time arrived, I found myself speaking on a video chat with a young-looking man wearing a baseball cap and work shirt.

“I own F.O. Machine Shop here in Fair Oaks, and we’re doing pretty well. However, I’m looking to reduce waste and rework. Mike and Rudy told me about you and said that’s your specialty,” said Tom.

“Well, I’d be glad to take a look at your data. I’m sure we might be able to point out some areas for improvement. I’m taking notes here… Fair Oaks is near Sacramento, right? Does F.O. stand for Fair Oaks?” I asked.

Tom chuckled. “Not exactly. When I was young, I was one of those angry ‘I won’t do what you tell me’ kids, and one of my teachers started calling me ‘F.O.’ for ‘Furious Opposition’. At least, that’s what he told me it stood for,” he said, chuckling.

I nodded. “Got it. We were all a bit rebellious when we were young, right?”

“Renegades of their time and age,” Tom agreed. “So I’ve got some data I gathered from the milling machine on cutting speed and tool life. Let me share my screen.”

In a moment, I saw this: 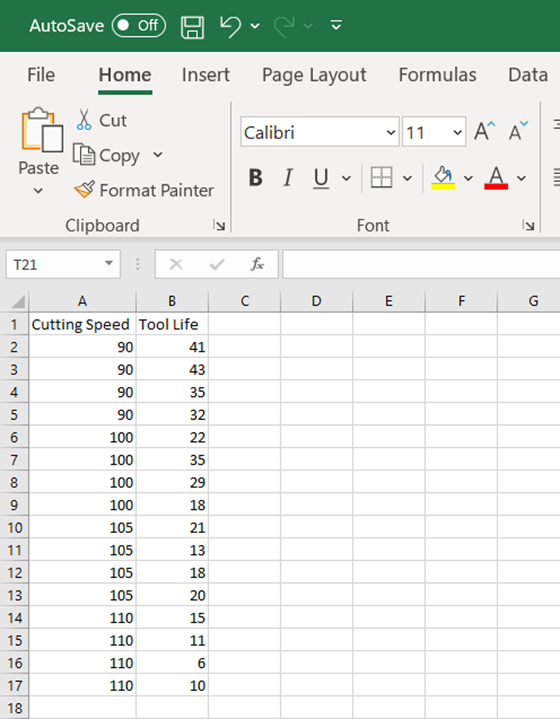 “Excellent,” I said. “So first of all, I’m going to recommend a piece of software for you…”

Tom interrupted me. “QI Macros? Already bought licenses for all the folks here who need it. The Schenker brothers raved about that software almost as much as they raved about you.”

“Fantastic!” I replied. “That’s going to make things much easier. All right, so you’ve got two things varying here: The speed at which the tool is running and the useful life of the tool. First, we need to see if they’re correlated, and how. To do that, I highlight the data and select the scatter plot.” 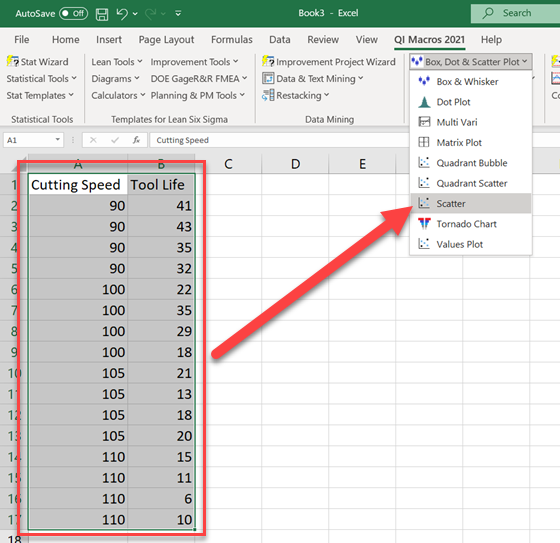 I did so and the software generated a scatter plot. 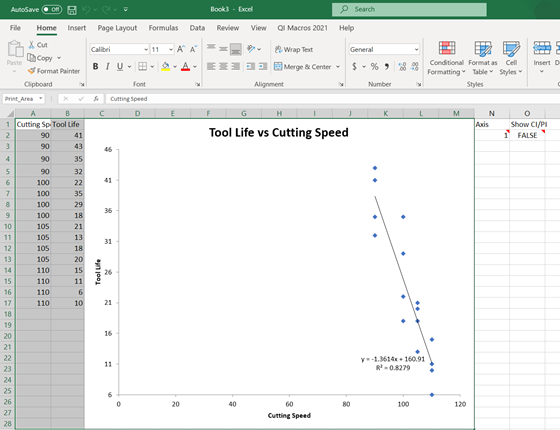 I continued, “This shows that as the cutting speed increases, the tool life decreases. The R squared value is over .8, so it’s a strong correlation. In order to optimize this, we’ll need to have data about number of parts completed per hour at different cutting times, then we just look at where those lines intersect – the cutting speed that ensures the longest tool life as well as the greatest number of parts per hour.”

“That’s awesome,” offered Tom. “Unfortunately, I don’t have the parts per hour data, but I can begin gathering it. I mean, it has to start sometime. What better place than here, and what better time than now, right?”

“So tell me, if I wanted the Tool Life data plotted on the X axis and the Cutting Speed data on the Y axis, would i just go back, flip the columns and re-do the chart?” Tom asked.

“You could do that, but there’s an easier way.” I pointed to a cell next to the chart. “See that value under ‘Column’? That’s the column that the software plots on the X axis. It says 1 now, so if you want to flip the axes, change the 1 to a 2.”

Tom did so and the graph re-drew itself: 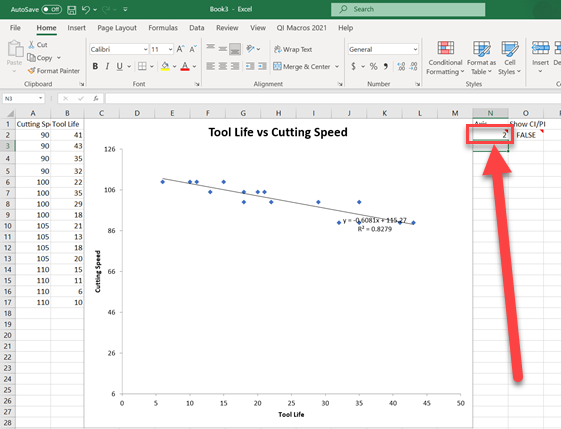 “You’re right, that is easier!” Tom exclaimed. “Can I adjust the range of the Y axis to get rid of some of the white space underneath the plot?” he asked.

“Sure. Since QI Macros operates under Excel, Excel makes changing the format of the axis pretty easy. Right-click directly on the Y axis and select ‘Format Axis.’ Excel gives you the option to customize a lot of that, including the minimum and maximum plotted on the axis.”

Tom followed those steps and changed the axis values, and the chart immediately changed to this: 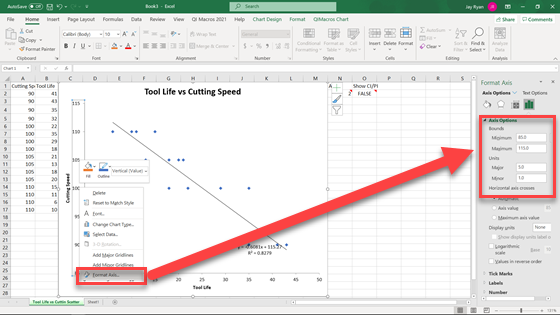 “Wow! This software is great. I can see why the Schenker brothers recommended it.” He leaned back in his chair, and I could see him smiling as he absentmindedly rolled something between the palms of his hands.

“I’ve been working with it for years, and I think QI Macros is pretty amazing,” I said. “Incidentally, is that a seashell in your hands?”

Tom looked down at his hands. “It is. I always keep a pocket full of shells. Keeping things like this close by got me through the stress of college.”

“Oh yeah? UC Davis, there in Sacramento?” I asked.

Tom shrugged his shoulders almost apologetically. “Harvard, actually. So listen, I’m sold. I’ll send over some more data. Go through it and let me know if you have any questions of suggestions on data we need to begin to track. Let’s schedule another meeting once you’ve gone through it. How does that sound?”

“Sounds great, Tom. I look forward to working with you.”

If you’re interested in learning more about creating scatter plots in QI Macros, click HERE and HERE to read about it on the QI Macros website.

The ability to easily shift the X and Y axes in a scatter plot was added to QI Macros in the 2018.10 release. If your version of QI Macros is older than 2018.10, click HERE to find out about upgrading.