Watching golf, I’ve had a feeling that there is a pattern to misses by both men’s and women’s professionals. It seemed like most putts missed were below the hole. So this weekend, I recorded the final round of the 2021 LPGA Pure Silk Championship and studied the putts missed.

All greens are curved to challenge golfers. Few putts are straight. I can usually tell by the arc of the putt how it missed the hole. Short ones are easy. With high putts, they arc over the hole, then fall down past the hole. With low putts, they arc before the hole and fall off.

So, I created a checksheet of the putts televised in the final round. While these do not represent all of the putts, it’s a pretty good sample of the golfers leading the field. Should be the best of the best. Here’s the Pareto pattern of putts missed: 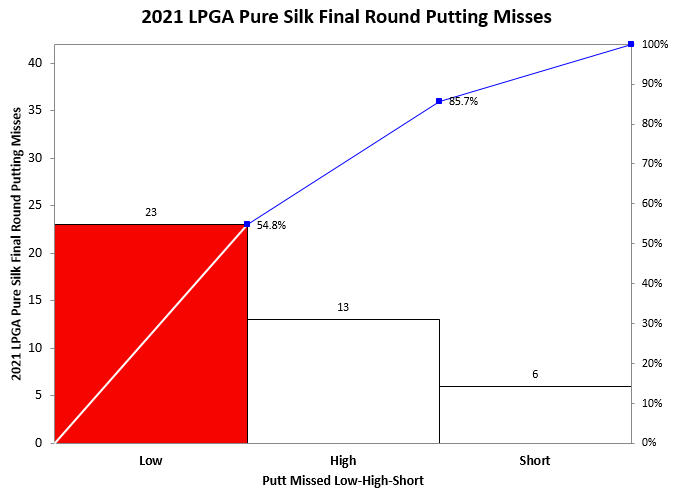 As you can see, the most common miss is low, below the hole. Putts rarely fall in from below the hole, but they have a chance above the hole. So the best way for these pros to improve their putting is to aim the width of a ball or two higher. Few misses were more than an inch or two.

Dave Pelz’ Putting Bible is Six Sigma for putting. He recommends that most putts should be long enough to go about 18 inches beyond the hole. As you can see, few golfers were short of the hole.

However, one golfer had two of the six short putts (I think it was Sarah Kemp). She even knows she needs to get the ball to the hole. The putt can’t go in if it doesn’t get to the hole.

If a putt doesn’t have enough speed, it won’t hold the line and will break more sharply at the hole leading to putts missed low. If I remember correctly, Lexi Thompson had a couple of putts that missed low because of a lack of speed.

Although I didn’t keep track, I noticed that some golfers tended to be high and a few low. There’s a pattern to their misses. Years ago, I created a booklet on Six Sigma Golf. On pages 11-13 you’ll find insights about putting. On page 25 you’ll find a checksheet I use to figure out if I’m putting low or high, long or short. There’s a pattern to my misses, which I can correct through practice. You can too.

My hypothesis that most putts are missed low was confirmed through analysis of the data. I often wish that golf had the kind of stats collected by baseball.

I only focused on the missed putts, but 22 of total putts were holed on the first putt. These women are great putters.

I also recorded the final round of the PGA won by Phil Mickelson. I created a checksheet of final round putting. Here’s what I found. Putts missed high, low and short were almost identical over the first 9 holes. A classic Parflato pattern with nothing to report. 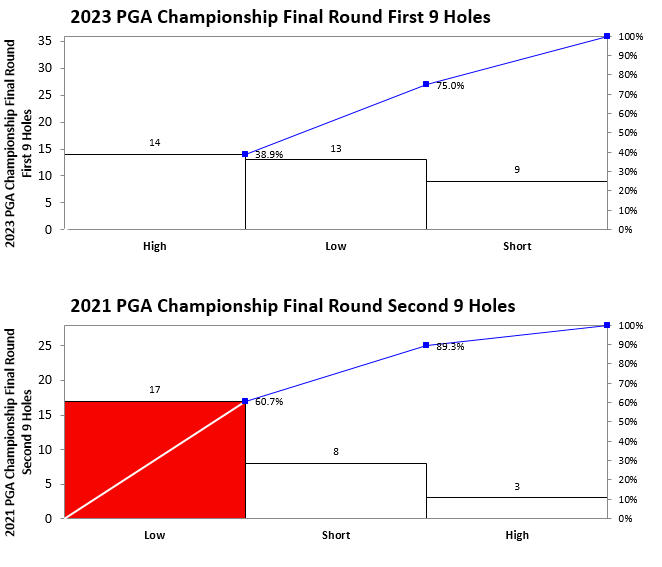 The second 9 holes show a different pattern: more shots missed low, few shots missed high and about the same number short. Was it nerves? Was it getting tired? Was the back 9 just harder to read? The overall missed putts for the final round were:

I did not do the front 9/back 9 analysis for the LPGA, but the lessons are clear; more putts are missed below the hole.

In my own analysis, I found that I hit short putts too long, and long putts too short. I also tended to miss putts low. I’ve sought to correct my putting through practice and I’m shooting lower scores. You can too. Again, consider looking at my booklet on Six Sigma Golf.