One of the great things about my job is that I get to help people and businesses. When I get to help a friend and his business, that’s even better.

Last month I got a call from Jamie, who I had known for many years. He’d asked me to meet him at his shop and talk about some Quality Improvement projects they needed help with. When the time arrived, I found myself at Progtastics Screen Printing, being given a tour by Jamie.

“Very nice!” I remarked. “And to think that all this grew out of the same garage where our old band used to rehearse!”

Jamie nodded. “I’m glad I no longer have to push the printing off to the side every night to set up my drums, then undo everything after rehearsal so I could print more the next day.” He motioned me to follow him outside to a patio area.

It was a beautiful fall day, so I didn’t mind continuing our conversation in the sunshine. I sat at a picnic table, and Jamie sat in a chair at another table several feet away.

“Well, things are still going good here,” he began, knocking on the wooden picnic table superstitiously. “I kind of think they could be better, but I don’t know where to start. I know that’s your area of expertise, so I thought I’d call you.”

“Do you have any data on waste, rework, defects… things like that?” I inquired.

“I do,” Jamie answered, pulling a USB drive out of his jeans and tossing it to me. “I’ve kept track of the date of the mistake, which line it happened on, and what the mistake was.”

I inserted the USB into my laptop and opened his data file. This is what I saw: 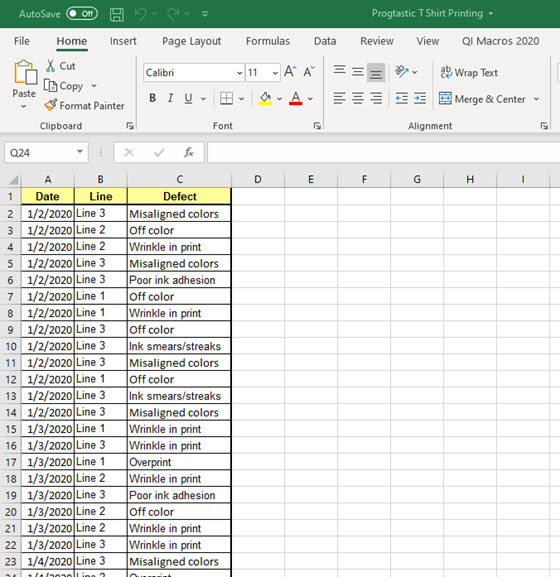 “So how do you decide where to start improving?” Jamie asked.

“Well, do you remember when we went to see that band with the really wild drummer? The one who kept thrashing his arms all over the place?” Jamie nodded. “You told me that often, the best drummers are the ones who minimize extraneous movements.”

“It’s true,” Jamie replied. “Thrashing around like that might make for a great show, but you can’t keep it up for a whole 4 hour gig and hit all your beats on time. It’s really about efficiency – getting the same result with the least amount of energy expended.”

“Well, Quality Improvement is just like that. You’re looking for the smallest, narrowest problem that, when solved, gives you the greatest reduction in waste, rework or lost profits,” I explained.

Jamie nodded. “Got it… but how do you know what that problem is?”

I patted my laptop. “I’ve got some software that does a lot of that pre-work for me. I’ll show you. I take your data, I highlight the ‘Date’ and “Defect’ columns, and then I click the QI Macros Data Mining Wizard and it analyzes your data in a couple of different ways.” 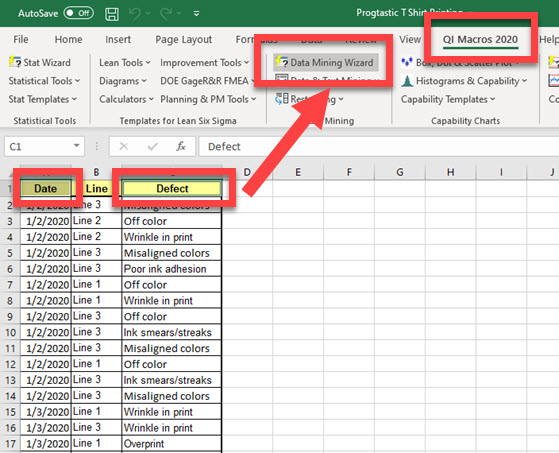 The software processed for a moment, created several additional tabs in the spreadsheet, and stopped on the “Analysis Summary” tab: 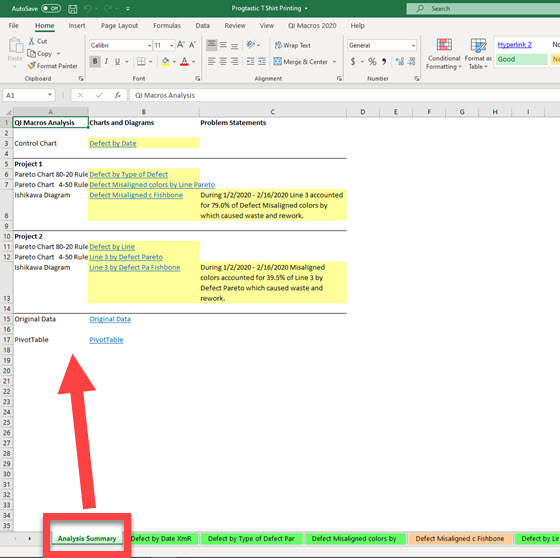 “So here’s where we begin. This is a summary of what it did. The software pored through your data and analyzed it in two different ways. In this tab, each piece is hotlinked so you can just click on it and go directly to whatever piece you want. I’ll go through all of this step by step,” I began.

I clicked to the next tab. “First, it took all of your defect data and charted it all by date.”

“What does this tell us?” Jamie asked.

“If your company were a band, I’d say that you have a very stable, consistent drummer.”

Even behind his mask, I could tell Jamie’s face looked puzzled, so I continued.

“Okay, but what does this chart have to do with that?” Jamie asked.

“This chart says that, overall, your company’s processes are stable. You might have a few more defects on one day or another, but they are all within the limits of where statistics says are acceptable and expected. If you had unusual trends in your defects, like daily defects steadily increasing over time or something like that, this chart would show us by turning those points red. We don’t see that, so what it’s telling me is you have a pretty stable process,” I explained.

Jamie nodded his understanding, so I continued to the next tab. 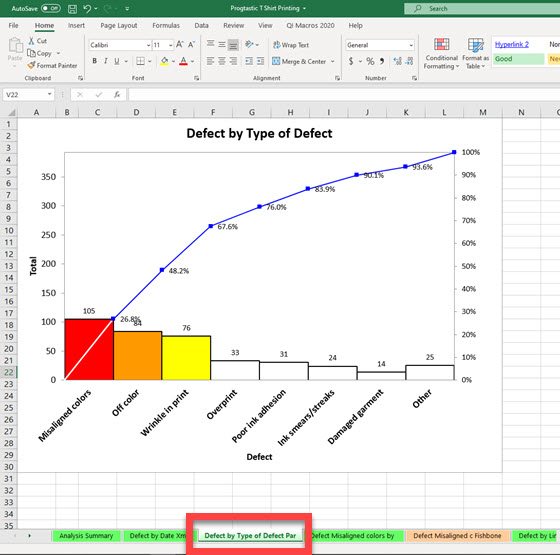 “Okay, this is what’s called a Pareto chart, and here we see all the defects in your plant, but sorted by the type of defect. It’s also put the categories with the greatest number of occurrences in descending order from the left,” I explained.

“Why are some shown in color?” Jamie asked.

“The QI Macros Data Mining Wizard shows any category that represents 20% of the total or more in color to make it stand out,” I answered.

“Remember what you said earlier about getting the same result with the least amount of energy expended? This chart shows that Misaligned Colors represent more than 26% of the total number of defects. If you figure out how to solve that one problem, you’ll have reduced your waste and lost profits by more than 25%… just by solving that one problem!”

With his fingers, Jamie beat a drumroll on the picnic table. “Taaa Daaaa!!!! So that’s it. I’ll schedule a company-wide meeting next week and we’ll all figure out how to fix the Misaligned Colors problem.”

“Well, I think if you did that, you’d be adding unnecessary lost-time waste into the mix.”

“What do you mean?” Jamie asked.

“How many people work here at the company?” I asked.

“Okay, let’s pause for a minute. Hold that thought and let’s look at the next tab.” 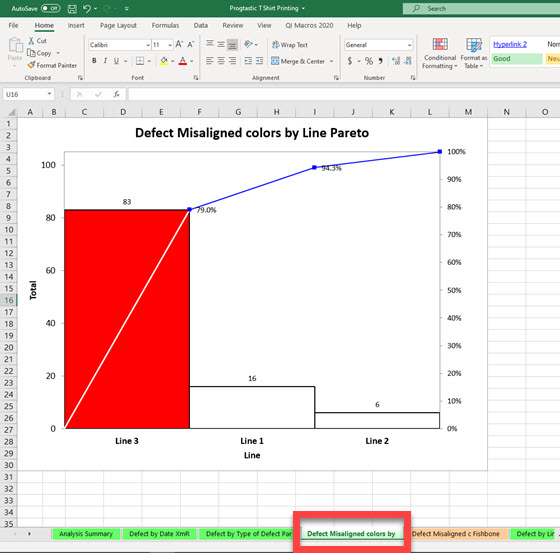 “So the software took every instance in the big bar of that last Pareto chart and broke it down into where those errors are occurring. Notice anything unusual here?” I prodded.

“Exactly. How many people work on Line 3?” I continued.

“And so when you schedule the meeting about figuring out how to fix the Misaligned Colors problem, do you have to pay 20 people to be at a meeting instead of working, or just the 4 or 5 who work on Line 3?”

“I see what you’re saying. No. Only Line 3,” Jamie responded.

“This is amazing. I’m so glad I called you. This makes so much sense, but I would have never known how to do it this way,” Jamie said appreciatively.

“Well, thank you… but so far all I’ve done is push one button. I wasn’t kidding – the QI Macros Data Mining Wizard does all of this automatically. It even sets up this blank template for our problem-solving meeting,” I said, continuing to the next tab. 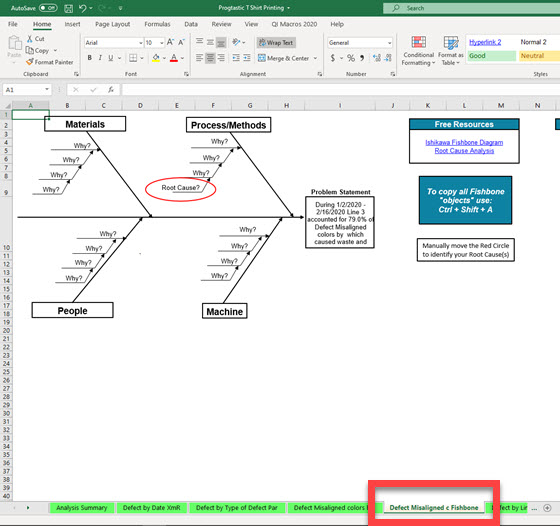 “This is an Ishikawa Diagram… but most people call it by what it looks like: a Fishbone Diagram. It’s a way to list the problem you’re having, then list all the types of contributing factors. In this case, the contributing factors might be categorized as Materials issues, Process or Methods issues, People issues and Machine issues. We’ll go through and figure out what in each factor is causing the Misaligned colors, then what’s causing THAT, and what’s causing THAT, and so on. Usually you can get to the root cause of each in about five steps or less.” I explained.

“Once you get into it, it’s really not. I’ll be there to lead the meeting and guide you all through this… but as impressive as that all is, the software didn’t stop there.”

“Yep. Once it was done with all that, it took a run at the data from the other direction just to see what it found out if it analyzed it that way.” 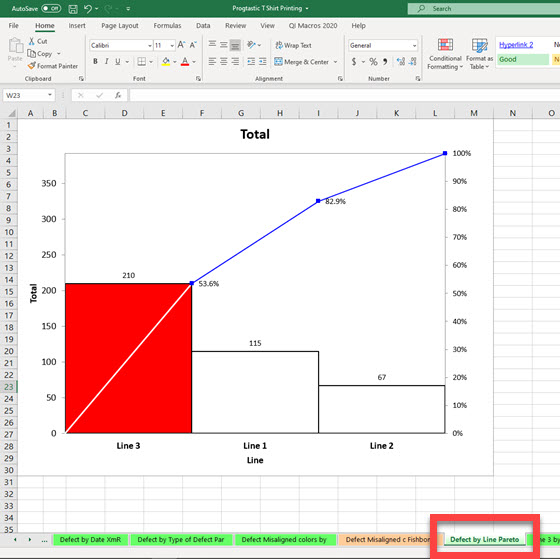 “Here, it’s taken all the defects together, but broken them down by production line.”

“I can already see… my whole problem is the workers on Line 3!” Jamie said angrily.

I held my hand up. “Hold on, hold on. I’ve been doing this a long time and I can tell you that the answer is almost NEVER ‘the people are the problem.’ We’re talking about your process, and your process shows the greatest potential for improvement at Line 3. There are a lot of reasons that’s happening other than ‘the workers on Line 3.’ Defects at Line 3 account for 53% of the total number of defects. Rather than getting angry or frustrated, let’s just figure out what’s happening and fix it, right?” Jamie nodded. 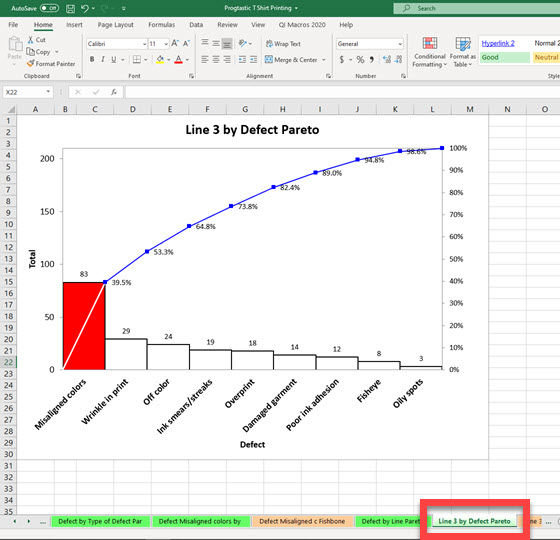 “Okay, so this shows all the defects that come out of Line 3. Misaligned colors account for about 40% of those. The software came at the data from the other direction and identified the one area that needs to be a priority – Misaligned Colors on Line 3. This took just a few seconds to identify the issue by approaching the data in two different ways. Now we can identify the root causes, come up with countermeasures to address the root causes, and then implement them. We’re well on our way to making a huge impact in reducing your waste and lost profit.”

Jamie shook his head in disbelief. “That software did all this automatically by pushing one button?”

“Yep… but lucky for you, I know which button to push. It’s all included in my consultant’s fee,” I said, closing my laptop.

“If you can make the rest of the process as easy as that was, whatever you’re charging us isn’t nearly enough,” he remarked.

“I’ll remember that when I make out your invoice. Let’s go in and schedule the meeting with Line 3.”

If you’d like to learn more about the QI Macros Data Mining Wizard, click THIS LINK to view Jay demonstrating the tool, and click HERE to learn more.