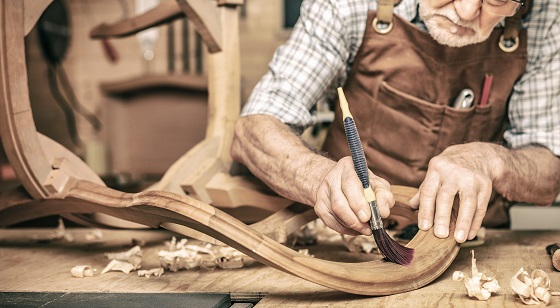 When I was a young, poor college student, I bought a chair at a garage sale. I wasn’t looking for a chair, but this vinyl tufted recliner just called out to me. Since its precarious trip home from that garage sale – upside down on a blanket on the roof of my rusted-out green AMC Hornet – that chair has remained one of the most comfortable chairs I’ve ever sat in.

Recently, I noticed that the years had taken its toll on my old friend: the vinyl was cracked and split with age, the wood was dinged up and faded, and it was in general need of some TLC. I did some research and found a highly-rated shop outside of town, and the owner told me to bring it by and gave me directions to the shop. In a short time, I found myself preparing to unload the chair from my SUV outside of the Affirmative Repair Shop.

“Hey there! You must be the fella I talked to on the phone!” called out a man with an English accent who walked out of the shop door. He looked to be slightly older, with a white goatee and a mop of white hair that hung down all around his head.

“Hi,” I greeted him. “I’m glad you gave those directions. I would have missed the bridge after the roundabout.”

“Lots of people do. Glad to see you found the place. I’m Chris, the owner of Affirmative… well, in name, at least. Can I give you a hand there? That seems pretty close to the edge,” he offered.

“It’s not nearly as fragile as it seems, but be my guest.” I  replied. I moved to one side and Chris took the other. Together we carried it inside.

“Thank you for the assistance, Sir Knight!” I said.

Chris waved off the title. “No, I’m no knight; I’m only a squire at best,” he chuckled.

The shop was a well-lit and comfortable place, with workers at benches and tables repairing and refinishing various pieces of furniture. Chris pointed to my chair. 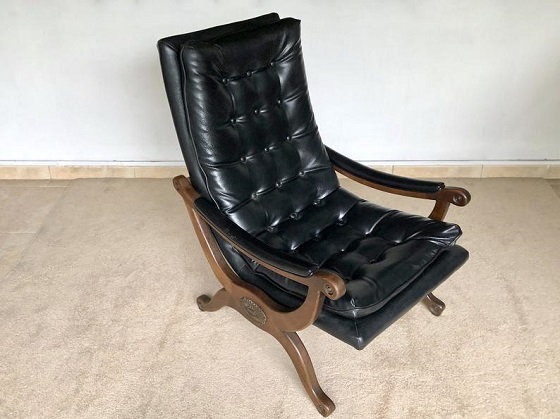 “This is a Stansberry recliner from the 1950s. Haven’t seen one since the turn of the century. ‘Tempus Fugit,‘ as the Romans say: Time flies. Why don’t you follow me into my office for time and a word?”

Once inside Chris motioned to a chair, then sat down behind his desk.

“I couldn’t help but notice… is that worker out there wearing a cape?” I asked.

Chris smiled. “That’s Rick. He does a lot of the refinishing work, so spends a lot of time in the spray booth in full mask and gear. When he’s not all suited up he gets chilled in the shop, but I won’t let him wear his gear out here because he gets paint over everything. A couple years ago we made him a cape with sequins on it as a joke, and he’s worn one ever since.”

“Leave it; we’ll come back to the chair. I wanted to talk about hiring you to help us out here at Affirmative,” Chris began.

I was puzzled by the offer. “But I don’t know anything about furniture repair.”

“Well that’s good; I don’t need another competitor. What I need is your knowledge about improvement. Some friends of mine own B&B Custom Badges, and they were really impressed with how you helped them out. I wondered if you might be able to do the same here, without all the long distance runaround I’ve gotten when I’ve reached out to others.”

“Aha! That makes much more sense. Of course. Where would you like to begin?”

“Well, I have lots of data but I don’t know how to track it.”

“Tell you what,” I offered. “If you’ll pull up your data, I’ll pop back out to my car and grab my computer.”

When I returned, Chris had some figures on his screen. He’d copied them to a USB drive, and when I opened it, I saw this: 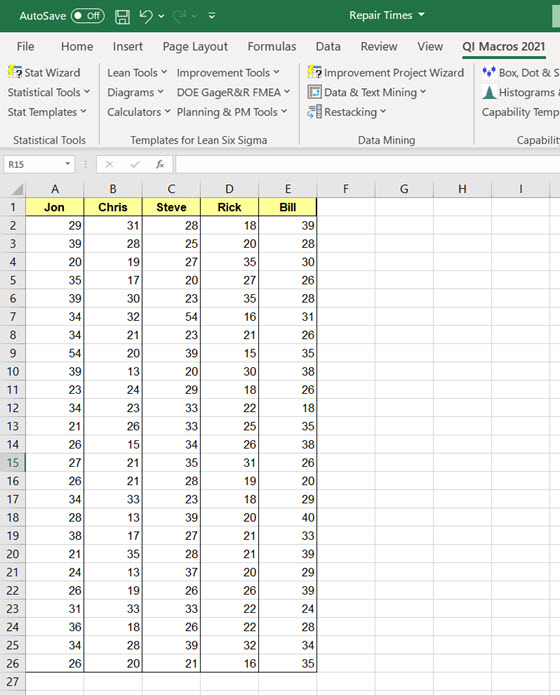 “All right, so what am I looking at here?” I asked.

“These are repair times from the guys here on their projects,” answered Chris.

“Got it. So although this isn’t exactly the place where I’d begin analysis for improvement, I’ll show you an example of displaying your data in a way that is easier to see. One way we might look at these all together is to generate a Box and Whisker chart. That way we can see everything separated out by worker, but side by side.”

I highlighted the data and selected the Box and Whisker chart from the menu: 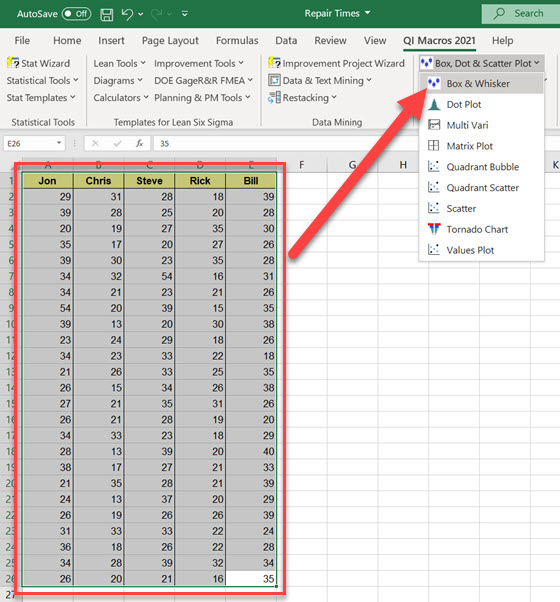 “All right, so here it’s asking if we want to look at these grouped by row or column,” I began.

I clicked the ‘column’ button: 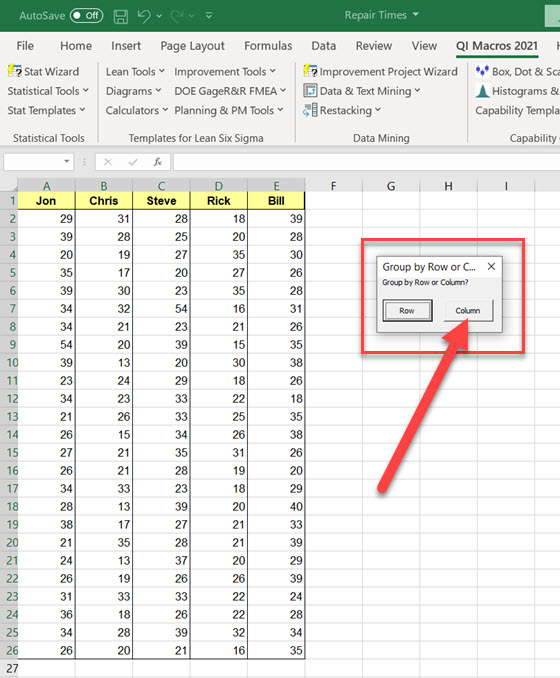 The software worked for a moment and created the chart: 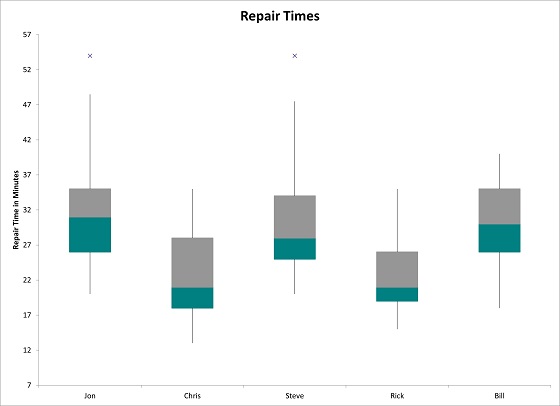 Chris looked at the chart. “So…what am I looking at here?”

“Okay, so this is called a Box and Whisker chart,” I began. “Let’s begin in the middle and work outwards. See the line where the grey part of the box meets the green part of the box? That’s the median. If you arrange your data in order, the median is place in your data where you have as many data points above it as below it. If you had 5 points, point 3 is the median because there are 2 points above it and 2 points below it. In your case, since you have 25 points, the median is point 13, because there are 12 points that are larger than point 13 and 12 points that are smaller.”

“I understand,” said Chris. “The next things to look at are called quartiles. So you see how the median splits the data in two with an even number of points above the median and below it?” Chris nodded. “Well, let’s do that again, only let’s find the point that’s in between the smallest point and the median. That point splits the bottom half into two. The lowest one we call the First Quartile, and the other one we call the Second Quartile. The second quartile is shown here on this chart in green.”

“Ah, I see. And so the grey part would be the Third Quartile, which is just like the second quartile, only greater than the median?” asked Chris.

“Precisely. That 2nd and 3rd quartile together – on this chart, that’s the grey part and the green part – make up the box of the box and whisker chart. It’s also called the Middle Quartiles, or sometimes the InterQuartile Range. Just looking at the chart makes it easier to compare. See how Rick’s box is smaller than everyone else’s? That shows that he’s much more consistent in how long his repairs take than other people’s repairs. The middle quartiles of his repairs take between 18 and 25 minutes to complete. Compare that to Jon, whose middle quartiles take between 26 to 35 minutes to complete.”

Chris seemed to be focused on the screen, so I pressed on. “The 1st and 4th quartiles are represented by these whiskers here above and below the box. Any points that appear far outside what statistics defines as a normal range are outliers. They’re shown as x’s past the end of the whiskers.

Chris started at the screen, absently brushing his goatee and murmuring to himself. “Every little thing matters… I mean, we’ve a whale of a business going, so the key here is don’t kill the whale. But definitely room for improvement… plus, there’s that chap called Trevor…”

I interjected, “Forgive me, but I’m not sure that this preliminary analysis is enough to base personnel decisions on, if that’s what you’re thinking.”

He seemed to startle out of his murmuring. “Oh… sorry. No, no, just thinking out loud to myself. Absolutely.” He waved his hand as if to dismiss his previous thoughts. “You’ve convinced me. How about we start this way: I’ll send you the data I have and you can see if there’s anything we can start with there. If not, we can talk about what we should start tracking and go from there?” He stood up. “It’s your move.”

“Chris, that sounds great. And my chair?”

Chris nodded “I’ll take a look at the chair and let it tell me what it needs. I love those Midcentury Modern pieces; they always have such wondrous stories.”