I spent 21 years working in various parts of the Bell System, one of the biggest and best cash cows of the last century. Like most businesses, managers and employees used “trial-and-error”–the slowest method of improvement–to reveal common sense ways to better the business. In 1990, the Baby Bell I worked for started an all-or-nothing implementation of TQM–Total Quality Management. We had the total commitment of our CEO and leadership team. We trained team leaders (blackbelts), team members (greenbelts), and started hundreds of teams. We had everything people argue you should have to successfully implement Six Sigma.

After two years and millions of dollars, only a handful of teams had completed a project. Frustrated by the glacial slowness and paltry returns, the leadership team hired people from leading quality consulting firms to revitalize our TQM program. They started extensive process management efforts to map and measure the myriad processes of the phone company. Crazy quilts of process maps sprouted on walls all over the 14 state region, but the flowcharts only seemed to make these antiquated processes more rigid and inflexible.

Knowing that this lack of results would eventually kill TQM, a few of us started to look for ways to implement TQM to drive breakthrough improvements.

In 1994, the VP of computer operations was being hounded to improve the availability of the online ordering systems even though downtime was only 1%, but this translated into over 100,000 minutes of outage over a 9,000 terminal network. Even a minute of outage could result in many minutes of service representative unavailability, call delays, and customer dissatisfaction. Frustrated by the sloth-like speed of TQM teams, he decided to push the limits of reality. He set a goal of reducing downtime by 50% in one year.

A collective gasp went up from the managers and unionists alike. One of my quality cohorts took the challenge to heart and used existing data to quantify the problem and laser-focus the improvement effort in a few key areas. Armed with the data about where to focus to reduce downtime, he met with the leadership team and got approval to initiate root cause teams on each of the key issues. Once the teams completed the root cause analysis, they disbanded and the leadership team took over project management of the changes. Some were operating system changes, some were application system changes, and a few were hardware changes.

More Success: Meanwhile, I was working with the billing organization. Postage costs were rising dramatically and other costs were weighing down the performance of the organization. Using the same approach, billing teams were able to eliminate $20 million in postage expense and $16 million in adjustment expense in just under a year. In 2000, I worked with a wireless company who reduced order errors from 20% to 3% in just four months saving $250,000 a month. Sadly, while a few of us were learning how to succeed with TQM, the rest of the organization was growing tired of the drag of endless process management without any signs of improvement. At the end of 1995, the leadership team shut down TQM and downsized the quality staff.

What I’ve learned from this is that the tools of Six Sigma and TQM work flawlessly, but over 50% of TQM implementations failed. (This is less than a 2-Sigma success rate. Why haven’t we done a little root cause analysis on that?) The same appears to be in store for Six Sigma. The failure is caused by implementation, not methodology.

In the Baby Bell, we took an ”all-or-nothing” approach to implementing TQM: 100s of teams and weeks of training. Months can go by and years go by with little to show for it. Most Six Sigma "Black Belt" implementations are taking the same "wall-to-wall, floor-to-ceiling" approach that requires massive investments in training and up to a year before you start seeing any benefit. This “bet the business” approach is hazardous to your bottom line.

Instead, you might consider a "crawl-walk-run" approach that will let you maximize your return while minimizing your costs. Here’s why: To make TQM work, we had to go back to basics: laser focus using existing data, improve the mission critical processes, sustain the improvement, and honor our progress. This approach is covered in Lean Six Sigma Demystified. You can do it yourself or we can help via our Lean Six Sigma Consulting. 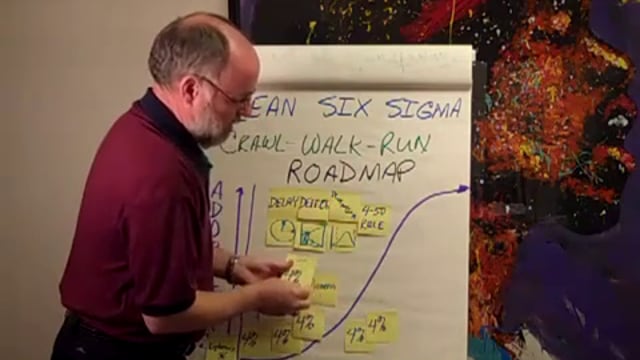 In case after case working with various businesses, I have found that less than 4% of your business causes over 50% of the waste, rework, cost, and lost profit. 4% of IBM’s computer operating system had over 65% of the errors. 4% of Americans hold over 50% of the wealth. So forget the old 80/20 rule. Narrow your focus even further to maximize your gains and minimize your Six Sigma startup costs. Only involve 4% of your staff in the initial wave of improvements focused on mission-critical elements of your business; in a small business that might be two people looking at data for an afternoon. Start “crawling” with Six Sigma so that you have time to understand and adapt the approach to your business. Then “walk” your way to success on the next 4%, and then the next 4%. Here's why:

Use The Power of Diffusion

50 years of research into how groups of people adopt, adapt or reject changes proves that transformational change begins with less than five percent of the work force. The first successful “wave” of Six Sigma teams focused on your mission-critical 4 percent will firmly root Six Sigma in your company. After several "waves" of improvement, these initial explorers will create the "critical mass" necessary to make Six Sigma unstoppable. Tip: Trying to implement Six Sigma everywhere invokes the corporate “immune” system-the naysayers and saboteurs who want to kill the new “program of the month.”

Remember the Dark Side of the 4-50 Rule

50% of your effort only produces 4% of the benefit. All-or-Nothing proponents seem to have forgotten this element of implementation. Why waste your hard-earned dollars by spreading them over the entire organization, when you can focus and achieve results in just a few key areas. Then, like seeds in the wind, word of mouth will spread the change to a few neighbors, and before long, the employees will convert with minimal resistance and expense.

What is Lean Six Sigma Demystified?

Most companies spend $15,000 to $40,000 to train a “black belt” in all of the exotic statistical tools necessary to solve ALL of the possible problems in a manufacturing or service business. But to go from 3 Sigma (30,000 PPM) to 5 Sigma (300 PPM), you don't really need all of the exotic statistical tools, you only need the common science of Six Sigma: a few key tools and laser focus. Have you ever noticed that to maximize your results in any endeavor you don't usually need to know everything, just a few essential elements? The same is true with Six Sigma. With just a few key tools: line, Pareto chart, fishbone diagram, and control charts, most companies can easily and routinely find ways to save big bucks and add them to the bottom line.

Start small, focus on mission critical issues, and start driving results. In my experience, it only takes a few days to find and solve some of the key problems in any business. It may, however, take a little longer to implement the solutions, but better soon than never. Just use the simple tools of Lean Six Sigma Demystified.

How is This Crawl-Walk-Run Approach Different?

If you are struggling to get some teams underway or just don't have the time, let us jump-start your efforts with our One Day Workshop or Consulting services.

In Lesson # 6 we will discuss the Principles of Lean