I've recently had the good fortune to stumble across Edward Tufte's books on the Visual Display of Quantitative Information (Graphics Press 2001). Tufte offers insights into how to best display information for maximum effect and easy of comprehension. Graphical excellence, Tufte insists, consists of:

While Tufte focuses on graphical artists who present data in newspapers and magazines, his insights apply to the Six Sigma Green Belt and Black Belts as well.

I've never given it much thought, but using graphs to show numbers is a recent invention dating from the late 1700s. Tufte says: "Often the most effective way to describe, explore, and summarize a set of numbers - even a very large set - is to look at pictures of those numbers."

Isn't that the essence of statistical process control (SPC)? Reducing large sets of numbers down to a few key visual insights?

Have you ever seen a chart or graph that has so much going on that you can't figure out what they're trying to show with the data? I sure have.

Tufte also offers some simple rules for cleaning up a graph:

Let's look at an example using data from c:\qimacros\testdata\line-run.xls. Using Excel's chart wizard, I could draw a simple bar chart of software errors: 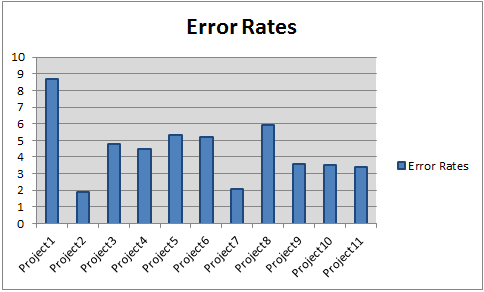 How many of Tufte's rules does this chart violate? Lots.

If we clean all of this up, we get a more pleasing chart: 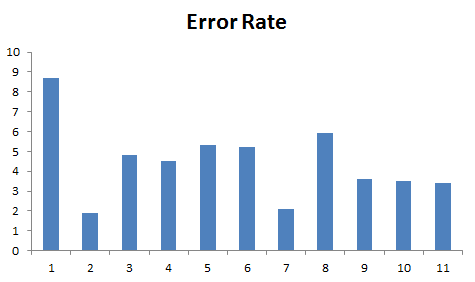 It's getting better, but is there a better order to this data other than project number? Yes, of course: descending error rates! 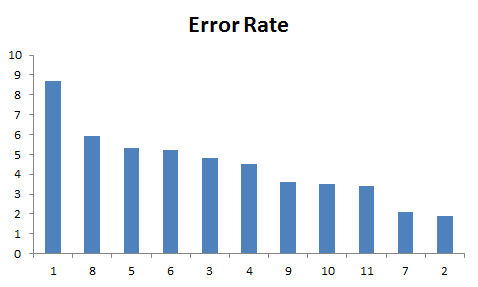 This chart is an improvement. The chart scale enhances the difference between the highest and lowest project defect ratio. The pareto chart can do an even better job of presenting this information: 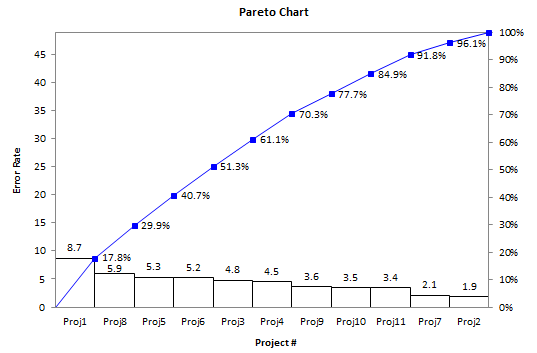 The pareto chart changes the scale for the bars and adds a cumulative line graph to show overall contribution of each bar. Now I still might want to know more about the projects: was project 1 small and project 8 huge (i.e., more errors). It might be more interesting to look at the total number of errors, not just the error rate.

The goal of every graph is to tell a story, advance an idea, or make a business case for spending money or taking action. The goal is to simplify and clarify the presentation of your story using the design principles Tufte expresses so elegantly in his book:

What is to be sought in designs for the display of information is the clear portrayal of complexity. Not the complication of the simple.

If you're interested, order a copy from Amazon: The Visual Display of Quantitative Information.