Why is Six Sigma So Slow?

SixSigma magazine announced the top 10 best places to work in Six Sigma. #1 was Starwood Hotels, with McKesson, Pfizer, Merck and UnitedHealthcare rounding out the top five. These companies have been on the Six Sigma journey for 7-to-13 years.

When you look at the number of people these companies have trained in Six Sigma, it's between 2-8% of all employees. The top two companies train: 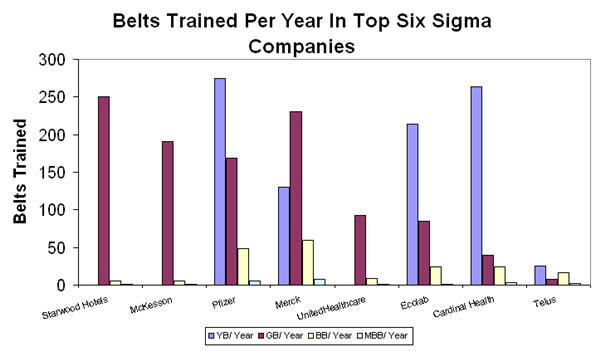 Even in huge companies with 30,000+ employees, this seems to be the pace of Six Sigma learning.

Author and speaker Seth Godin says: "Ideas that spread, WIN!" After a decade of watching the sluggish adoption of Six Sigma, I doubt that Six Sigma is spreading fast enough. Why is it so slow? Perhaps the Theory of Constraints (TOC) can shine a light on what's wrong.

Theory of Constraints and Six Sigma

TOC looks at four constraints as the bottlenecks in any process: resource, market, dummy and policy constraints. In the case of Six Sigma, the number of employees that can be trained in any given year is somewhat small compared to total employment. Why is that?

Even the companies training Yellow Belts are only able to train about 250 a year.

Second, let's face it: most Lean Six Sigma training is overkill for most projects unless you are one of the rare few that still work in manufacturing on a factory floor.

Third, a lot of companies are convinced by their consultants to use Minitab®, which is great for Black Belts, but overkill for everyone else. It requires a week of training to learn every nuance.

How do you break a constraint? By rethinking the content and delivery method.

So, let's reduce the content to the "vital few" tools needed to solve most problems: control charts, pareto charts, histograms and Ishikawa diagrams.

The American Society for Training Development (ASTD) found that a third or more of all corporate training is now delivered electronically. If you don't need an instructor in a classroom, then you don't need a classroom and employees don't need to take a lot of time off from their job to learn Six Sigma.

That's why I created the Lean Six Sigma "Money Belt" training at www.lssmb.com. Employees can easily spare 5-10 minutes a day to watch a video about one of the key methods or tools of Lean Six Sigma. In 30 days they should be able to cover the entire course with all of the exercises. Best of all...it's free.

They can even continue into the Green Belt or Champions training.

Then, give everyone the QI Macros to do Six Sigma charts and diagrams right in Excel, where most data resides.

Here's a hint: No leadership team is going to wait for decades.

Want to spread the "gospel" of Lean Six Sigma? Get your fellow employees started using my "Money Belt" training at www.lssmb.com. Use data and the QI Macros to laser-focus improvements on the "vital few" problems. Set a Big Hairy Audacious Goal and let Six Sigma's results speak for themselves.