Decisive Force in Lean Six Sigma
What does Colin Powell's doctrine of military success have to do with Lean Six Sigma? Everything.

A few months ago, I played a round of golf with guy from Honeywell who had been trained as a green belt a few years ago as part of Honeywell's train everyone in Six Sigma program. He admitted that he hadn't done an improvement project yet. I'm still stunned by the number of companies that track how many belts they've trained, as if that really matters. It's like measuring the success of a war by keeping a body count.

Success with Lean Six Sigma is not how many troops you put in the field (i.e., Black Belts, Green Belts, etc.). It's about how many profit-enhancing, delay-reducing, defect-reducing, variation-eliminating, customer-delighting improvements you put in place and keep in place.

Another downside of the universal training program is that teams are started on marginal projects which takes time away from customers.

Success with Lean Six Sigma is not about how many platoons are in the field(i.e., Six Sigma projects). It's about how many capture meaningful objectives. Too many teams end up majoring in minor things. They move water coolers, not mountains. Too much of the emphasis of Six Sigma involves brainstorming. Letting teams choose their own projects is like turning troops loose in a country and saying: capture whatever you want.

Let's revisit Powell's strategy: precise, clean, surgical. Using data about operational problems, you should be able to narrow your focus down to precise, clean problems that can be dealt with surgically by a small team of experts.

Remember the Dark Side of Pareto's Rule: 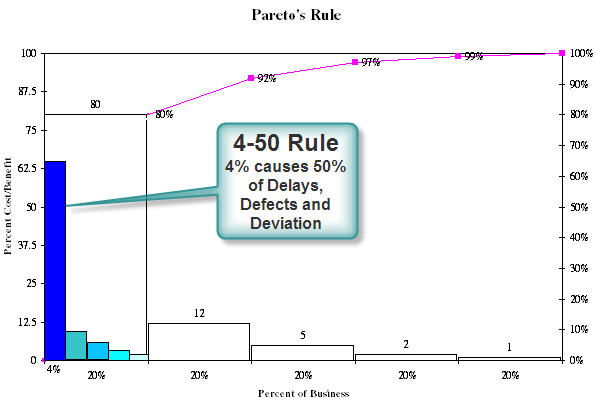 Here's My Point
Overwhelming force makes it seem like we're doing everything possible to implement Lean Six Sigma. If it's not going well, then we get the urge to put more troops in the field. Training more people and starting more teams to brainstorm more problems to solve is an invitation to disaster.

It's up to you, but I'd like you to consider that Colin Powell's doctrine of decisive force will make a dramatic difference in the effectiveness of your Lean Six Sigma efforts. Isn't it time to start majoring in major things?