Analyzing Data With More Than One Variable

When you are analyzing data sets with more than one variable (i.e., multivariate analysis), consider using these tools in QI Macros.

Imagine for a moment that you are measuring the location of a hole drilled in a sheet of metal. It could be left or right, up or down. It's possible that both measurements, analyzed separately, could be stable and predictable, but the two together could have outliers. The Hotelling T2 chart helps evaluate two interacting measurements simultaneously.

In phase 1, the T21 chart is used to establish control. The goal is to get a stable and predictable process so that you can monitor future production using the T22 chart in phase 2. 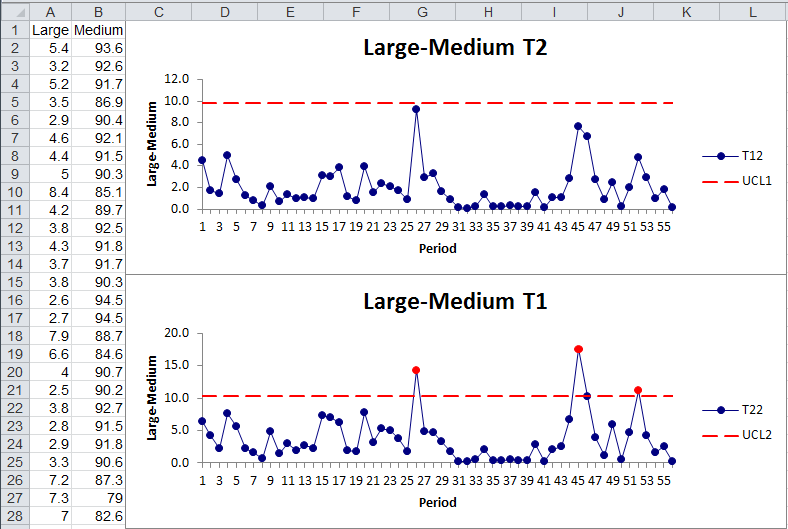 Matrix Plots are used to evaluate the correlation or cause-effect relationship (if any) between two or more variables (e.g., color, residue and perceived quality in shampoo). Matrix Plot data looks like this:

To run this chart in QI Macros, select the data and select Matrix Plot from the pull down menu. If the points are tightly clustered along a line like machine gun stitching, then there's probably a strong correlation. If it looks more like a shotgun blast, there is no correlation. 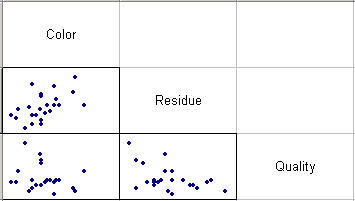