This functionality is most commonly used to show a process change on a control chart. However, many customers use it to compare two different processes side by side. If you are in healthcare, you could compare data for several different doctors, hospitals, floors, etc. If you are in manufacturing, you could compare data from different machines, lots, batches, etc. This functionality is illustrated in the following case study which uses Dr. Sophronia Ward's Brain Teaser column "Yield Confusion" in the November 2005 issue of Quality Magazine.

A production superintendent has 3 machines that polish chrome parts. One of his customers has asked that he include a control chart for the yield of their chrome parts to accompany each shipment. He has decided to construct a control chart using the combined data from all three machines even though the parts sent to this customer are only produced on machine 1.

What does a control chart run on the combined data tell you? To determine this, select the data in the Combined Yield column and run an XmR chart.

Note: The "Combined Yield" data in Dr. Ward's case study does not represent the average of the yields from the three machines. This is probably due to two reasons: The machine data is stated in percentages, not actual yields, and the production on each machine varies from the others. As a result, an XmR chart is run on the Combined Yield data instead of an XbarR chart run on the data of the three machines. 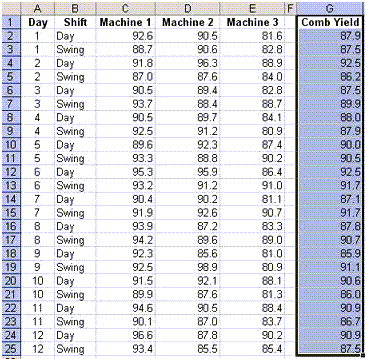 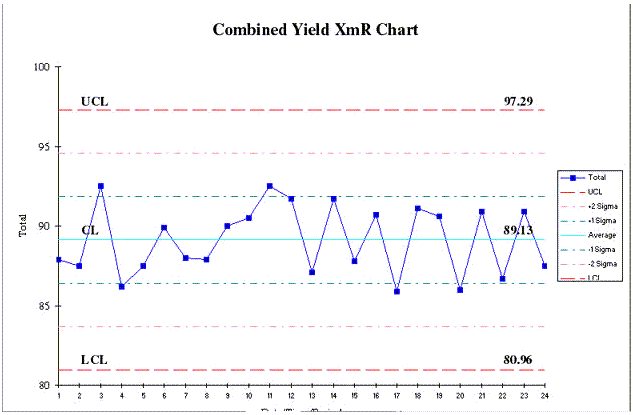 The control chart shows an average combined yield of 89.13 with no unstable points or conditions.

What problems might be encountered by using the combined data?

The problem with running this analysis on combined data is that problems with each individual machine become invisible. High and low values between machines offset each other and "average out". In this example, the problem is magnified since the customer only received parts from machine 1.

Since the parts are created using three different machines, the data for each machine should be analyzed separately and compared to the other two machines. There are several ways to do this using QI Macros.

If you are analyzing data in the aggregate, don't stop there. Break it apart by department, location, machine, doctor, teller, programmer, etc. You'll be surprised at what you learn and you'll be more likely to find the 4% of the problem that will deliver 50% of the benefits. Remember you've got to drill down to find the hidden goldmine in your business.