Where are the Quality Tools at ASQ WCQI?

Having reviewed the quality tool usage in posters at ASQ WCQI, I have to ask: Where are the Quality Tools?

“Hi, this is Jay Arthur, author of “Lean Six Sigma for Hospitals” and the QI Macros [software].

“I was at the ASQ World conference and I looked at the team posters – you know, the improvement posters that were located in the exhibit hall. Surprisingly, out of all of all these little posters that were out there were there only two control charts, there were about five fishbone [diagrams], maybe one Pareto chart, but most the rest of it was line and bar charts.

END_OF_DOCUMENT_TOKEN_TO_BE_REPLACED

Shewhart didn’t make our lives any easier 100 years ago when he started using control charts. Here’s why and what to do about it.

“Hi, this is Jay Arthur, author of “Lean Six Sigma Demystified” and the QI Macros [software].

“Now, a long time ago (I mean this was back in the 1920s and the 1930s), Shewhart did us a disservice. Now, he was most interested in economic control of quality of manufactured product, and he called the charts that he used for that “control charts.” I don’t know about you, but for most people when you hear the word control, they don’t like the idea of being controlled.

END_OF_DOCUMENT_TOKEN_TO_BE_REPLACED

Almost 50 people signed up for this webinar, with Jay Arthur demonstrating how to use some of the useful features of QI Macros, as well as some of the new features introduced in recent versions of the software.

Some attendees were familiar with the software and already use it, some had only begun to use it; all were interested in learning new ways that QI Macros can help them with their Agile Lean Six Sigma and Quality Improvement efforts. (You can hear him answering questions and comments typed in by webinar attendees.)

If you saw a feature demonstrated in the webinar that might have been added to QI Macros after the version you’re using (for instance, the “Find Tool” search feature or the automated Value Stream Map), you may need to purchase an upgrade to bring your QI Macros to the current version.

END_OF_DOCUMENT_TOKEN_TO_BE_REPLACED

Posted by Jay Arthur in Webinar.

Run charts used to be a bridge to control charts. You no longer need to build a bridge. Just start with Control Charts.

END_OF_DOCUMENT_TOKEN_TO_BE_REPLACED

The editor of Harvard Business Review says that “corporate survival today requires the capacity for rapid change.” Isn’t it time to embrace an Agile approach to Lean Six Sigma to “speed its evolution and better serve customers’ needs?”

END_OF_DOCUMENT_TOKEN_TO_BE_REPLACED

Nobody Wants to Read Your Spreadsheet!

The purpose of data is to provide insights for action, not just report past performance.

How Do I Know That Most Excel Users Try to Make Their Spreadsheets Readable By People?
According to Renu Davi, Sr. Program Manager for Excel, Microsoft tracks how people use Excel. The vast majority of the 650 million users use it for lists and reports.

END_OF_DOCUMENT_TOKEN_TO_BE_REPLACED

How to Craft an Improvement Story

In 1975, I went to work at Bell Laboratories in New Jersey. I was introduced to Unix and the Shell programming language. The cool thing about Shell was the hundreds of tools that each did simple things and could be cobbled together into scripts that would do amazingly complex things. I later wrote a book, Unix Shell Programming, that described my love affair with Shell.

Fast forward 20 years and I brought the same thinking that I’d learned from Unix Shell to Six Sigma. The QI Macros have hundreds of templates filled with a variety of worksheets to do many things.

END_OF_DOCUMENT_TOKEN_TO_BE_REPLACED

I recently got a question from a QI Macros user. His Cp/Cpk was high, while his Pp/Ppk were low. He wondered if there was a problem with the calculation in the QI Macros. 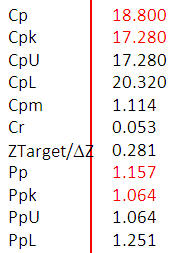 Whenever Cp is more than a third higher than Pp, it means the process isn’t stable. And a process has to be stable before you can do capability analysis. How do you check stability? With a Control Chart. Here’s the data in an XmR chart: 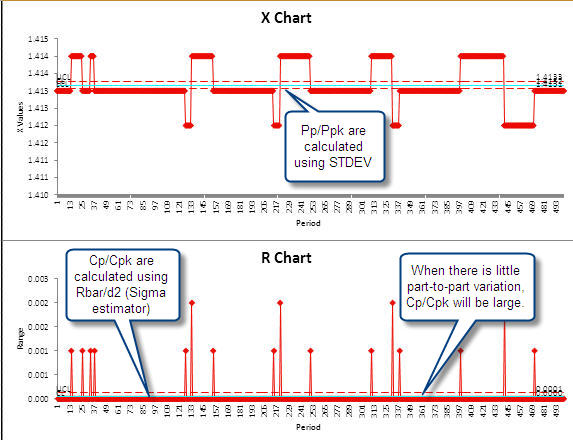 As you can see, the process runs at three different levels. I have found that any process shift, not matter how small will create out of control conditions that prohibit capability analysis.

END_OF_DOCUMENT_TOKEN_TO_BE_REPLACED

A customer called today confused about her data. She wanted to draw a control chart and thought the data might have a binomial or poisson distribution. She thought it was attribute data. She’d used the QI Macros Control Chart Wizard to create a control chart of her data and it chose an XmR chart. She wasn’t sure that was right. When I asked her what kind of data she had, she said, “write-offs”.

Write-offs are money, plain and simple. Money is variable (a.k.a. continuous or measured) data.

I explained that to her and suggested she stop worrying about what kind of distribution she has and just look at her data.